Girl, Woman, Other is the eighth novel written by Bernardine Evaristo, published in 2019 by Hamish Hamilton. It follows the lives of 12 characters in the United Kingdom over the course of several decades. The book was the co-winner of the 2019 Booker Prize alongside Margaret Atwood's The Testaments, and has since received twenty-five Book of the Year and Decade honours, alongside recognition as one of Barack Obama's Top 19 Books for 2019 and Roxane Gay's Favourite Book of 2019.[3] It currently features on many prize lists, including winning best fiction book at the 2020 the British Book Awards[4] and on the shortlist for The Women's Prize.
Cover: 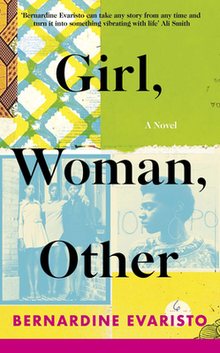